Show you what, exactly?

Of all the state mottos out there, Missouri’s has to be the worst.  Wait a minute, we almost forgot Alabama, didn’t we?  So, show me a yellow hammer, would ya?

This place is supposedly named after the first postmaster, blue-eyed Elbert N. Butler.  I’m buying the first part (it was actually a pretty common practice), but not the second.  Why not just call the place Butler, or Elbert?  Huh?
This town of 167 is actually part of Branson, the hillbilly Vegas.  It’s also right on the Arkansas border.  In fact, there’s also a Blue Eye, Arkansas (pop. 36).  Local high school athletes play for the Blue Eye Bulldogs. 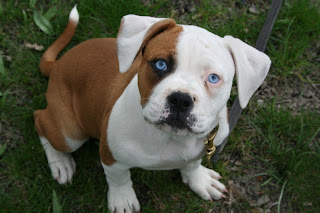 This place is right on the Arkansas border too, but over to the east.

It’s also on the Current River.  Which explains the name of the town.  Which is a pretty damn lame name for a river, if you ask me.

As much as I like the name Current View, I think I much prefer the previous one, Buck Skull.  So what’s there today?  Well, we’ve got some houses, some trailers, some dirt roads, a convenience store, and Jake’s Bar.

Not a bad idea.  You want to attract humans to your new town, and not gophers or armadillos or some other kind of creature.  So why name it something like Gopherville, or East Armadillo, or Donkeytown?  Makes no sense.  You want to name it after what you want to populate the place with, right?  Humans.  That’s what you want.  So, Humansville it is.

Well, it seems to have worked.  Humansville currently has just over 1,000 of them.  These humans have a newspaper, a high school, a fire department, several churches, a cemetery, a fall festival, and many more examples of advanced human civilization.

Okay, I think I’ve ridden that one about as far as it’s going to go ...  Would you believe the town was named after one James G. Human?  Yup, he was the first settler.  The surname actually comes from the word “yeoman,” which means a free farmer. 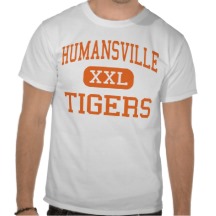 It’s hard to believe, but the origin of this town name would have to be described as “descriptive.”  Yup, it’s on a bend of the Big Piney River that is very sharp and could, in fact, be called rather devilish.  That was especially the case if you were an early lumberman, trying to get your logs downstream.

Devils Elbow also so happens to be on old Route 66.  In fact, Devils Elbow is the site of the famous Munger Moss Sandwich Shop, a real institution on the old Mother Road.  It’s still there, but is now a biker bar called the Elbow Inn.

I know all this probably doesn’t mean much to you, but as an old highway aficionado, I feel like I’ve died and gone to heaven. 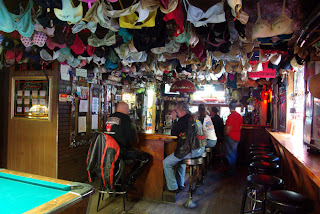 The Elbow Inn
(and, yes, those are bras on the ceiling)

You know, it’s a good thing to be proud of your town.  But were the town fathers who named this place aware that braggadocio means “boastful or arrogant behavior”?

So, where did it come from?  From a University of Missouri website:

Braggadocio is in the boot heel of Missouri, that strange little hook in the far southeast of the state.  The town’s basically a crossroads, at the intersection of Missouri J and Missouri Z, in the middle of a bunch of fields.  Looks really, really flat. 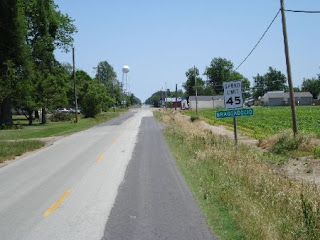 Hmm.  Not sure what they're
getting all braggadocio about,
if you ask me

Would you believe it’s Latin?  No, not the “knob” part.  The “noster” part.  That means “our,” so Knob Noster basically means “our knob.” Make sense?

The town itself?  It’s actually got about 2,800 people.  Its main claim to fame is nearby Whiteman Air Force Base, where all those B-2 Stealth Bombers fly out of.  Knob Noster is about halfway between Kansas City and Jefferson City. 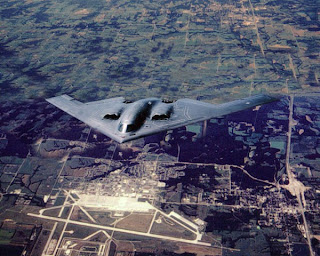 B-2 over Knob Noster

Well, wouldn’t you know – it’s not dirty at all.  It’s a railroad junction near the town of Conception, which was named after nearby Conception Abbey, which is full of very holy - and not dirty at all - Benedictine monks.

This town of 200 people is in the far northwest of the state.  It was in the news recently for a rare meteorite that fell in a local farmer’s field.  That meteorite actually got its own name, the Conception Junction Pallasite, and website. 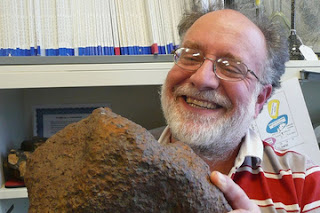 This unfortunate combination can be explained.  As I mentioned above, a knob is a small, rounded, freestanding hill.  A lick is a naturally occurring salt spring.  Put the two together, and you get a …  um … a, er … really unfortunate name for your little town.

For such a wonderfully named place, there’s surprisingly little on it.  There is a Scout ranch nearby.  It’s about 50 miles due south from St. Louis.

There is also a Knob Lick, Kentucky, by the way. 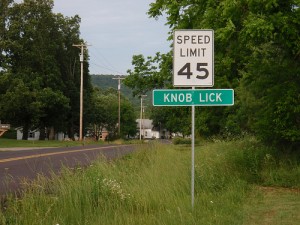 Now, here’s a town after my own heart.

Needless to say, there’s a great tall tale behind this one.  It involves a farmer (or postal employee), a store owner (or farmer), and an overpriced watermelon (or rooster, or whatever).  You can guess the rest.

My feeling is that Tightwad is probably a lot like Braggadocio.   You know, the people of this little burg probably got a reputation for squeezing a dollar, were quite proud of the fact, and officially adopted what had been only a nickname up to then.

This town of 70 is just southeast of Kansas City.  It’s the proud home of Tightwad Bank, an honest-to-goodness, FDIC-insured financial institution.  With such a great name, it should come as no surprise that the bank appeared in The Washington Post and Forbes. 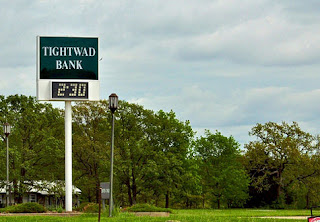 I understand they have a cents of humor

I don’t know what it is about this place.  It seems a little unusual, a little different.  I can’t say exactly.  Something odd, something unusual, something, something ...  I really just can’t put my finger on it.

Of course, there is no shortage of tall tales about this one too.  I’ll spare you those.

I really liked the spin the town’s website put on the whole issue:

A community that is peculiar in name only.  A name which has overshadowed our rich history.  Yet, this peculiar name has somehow set apart persons associated with it, creating a chemistry, within them, which makes them very important to each other.

This metropolis of 4600 is very close to KC (less than ten miles away).  It has one famous son, Pro Football Hall of Famer Paul Coffman.  Finally, Peculiar’s motto has also got to be one of the all-time classics: “Where the ‘odds’ are with you.” 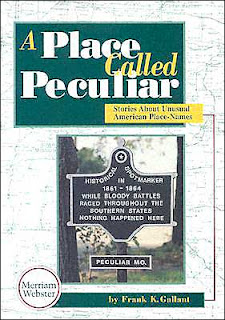 Plus it spawned this book
(highly recommended)